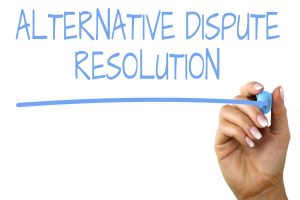 We have looked at the importance of alternative dispute resolution (ADR), as well as the many types of ADR, before.  While ADR has no single recognised legal definition in the United Kingdom the expression is used to refer to all methods of dispute resolution other than court proceedings. Commonly known examples include mediation and early neutral evaluation. All methods have their advantages and disadvantages, but one commonality is their voluntary nature. The court does not currently have powers to force a party to engage in any form of ADR. That being said, parties must reasonably consider ADR prior to, or after, proceedings are commenced or face the risk of an adverse costs order.

The case of Halsey v Milton Keynes General NHS Trust [2004] raised the question as to the legality of mandatory ADR. It was opined that such compulsion could be an obstruction to a parties right of access to the court, contrary to Article 6 of the European Human Rights Convention. Yet, in the ongoing discussion for mandatory ADR, a July 2021 report published by the Civil Justice Council has concluded that compulsory ADR is not an obstruction to a party’s right of access to the court, and therefore not incompatible with Article 6. The report not only declared that it is lawful for ADR to be compelled on disputing parties but also discussed how the courts’ case-management powers will be able to exercise this compulsion, and how reforms may even go so far as to make it a procedural rule that ADR must be considered as a pre-condition to issuing a claim. While ADR is not yet mandatory and some judges continue to oppose its compulsion, this report signals a potentially monumental change for dispute resolution. It could have a remarkable effect on the court system of England and Wales which is currently overwhelmed and has been for some years, although many insist that any compulsion within legal proceedings “undermines the value of the adjudicative system” (Civil Justice Council, Compulsory ADR Report, June 2021). Diligent introduction and procedures for compulsory ADR are vital to relieve pressure on the courts and to further educate the public on how ADR is, and can be, a successful mechanism for resolving disputes outside the courtroom. A resolution reached with the agreement of the parties is generally preferable to a protracted legal dispute.   Image: Alternative Dispute Resolution by Nick Youngson CC BY-SA 3.0 Alpha Stock Images Griffin Law is a dispute resolution firm comprising innovative, proactive, tenacious and commercially-minded lawyers. We pride ourselves on our close client relationships, which are uniquely enhanced by our transparent fee guarantee and a commitment to share the risks of litigation.  If you have any specific questions regarding a dispute, please email  justice@griffin.law or call 01732 52 59 23.

Nothing in this document constitutes any form of legal advice upon which any person can place any form of reliance of any kind whatsoever. We expressly disclaim, and you hereby irrevocably agree to waive, all or any liability of any kind whatsoever, whether in contract, tort or otherwise, to you or any other person who may read or otherwise come to learn of anything covered or referred to in this document. In the event that you wish to take any action in connection with the subject matter of this document, you should obtain legal advice before doing so. © Griffin Law Limited, 2022. All rights reserved.
By Griffin Law|2022-02-24T22:17:02+00:00February 24th, 2022|Arbitration and Alternative Dispute Resolution|Comments Off on Compulsory alternative dispute resolution

About the Author: Griffin Law