Recent sexual accusations against Harvey Weinstein and Kevin Spacey, and the rise of the #MeToo Always Believe the Victim movement, highlight two disturbing trends. A third trend lurks in the shadows. The first trend concerns the huge amount of abuse that happens at the hands of the men who think they have enough privilege and power to force themselves on others. The second is our community’s rush to condemn, before all sides are heard. Whilst victims of sexual abuse should instinctively be believed and supported, the presumption of innocent until proven guilty seems to have gone out the window. The online #metoo movement sends out angry messages in real time and always before the full picture has emerged, more often than not releasing a genie that cannot be rebottled. The accusation of child abuse against Kevin Spacey is a serious one, but so is the universal condemnation of him before an admission, charges or even a conviction. As a society, where do we draw the line between two important principles, ‘protect the victim’ and ‘innocent until proven guilty’? This question leads to a third disturbing trend: False or exaggerated accusations that not only harm the accused, but harm real victims of gender and sexual based violence. Each false or exaggerated report makes it easier to dismiss and disbelieve real victims. False and exaggerated claims can and should be crimes too. Take the accusations against former President George H. W. Bush. He was accused of sexually harassing a women seventy years his junior. Many called her brave for speaking out. Others pointed out that the former President’s accused actions took place from a wheelchair, next to his wife, in front of cameras. Many on social media supported the victim, while many found it uncomfortable that the victim was equating her situation with women allegedly raped at the hands of Harvey Weinstein. Was this claim false, exaggerated or legitimate? People will have differing views. Not knowing the full facts of that case, we make no comment. We do however make forceful comment on facts of a false claim we know in great detail. Our law firm, Griffin Law, was instructed to stop and unmask a campaign of harassment, which included a false claim of rape and other malicious activities towards a man and his family who were all innocent victims. It is both a matter of public record we may now discuss and a truly sad case. While most reported rapes are true, there are a small number of people who take advantage of these serious allegations and falsely report rape and abuse. Courts are now starting to take false reports seriously enough to impose jail time. Ms Rebecca Shirley Palmer was found guilty of malicious communications and perverting the course of justice. She was sentenced to 5 years in jail in a public court. Her name and crime are now rightly part of the public record and can and should be discussed. We need to underline here that a real victim of sexual violence should be believed, report the crime and deserves all the support, encouragement and help they need.

Our law firm feels so strongly about stopping abuse that we are working pro-bono to expose the massive scale of sex crimes perpetrated against children by the United Nations.*

But for a person considering being one of the rare cases of false reporting, a crime that destroys families and creates victims, the following should be a salutatory lesson. Ms Rebecca Palmer created fake social media profiles to harass and falsely accuse our client of rape and abuse. During an investigation that spanned nearly 2 years, our client was arrested on more than one occasion, later released on bail and spent time in custody. Ms Palmer also forged a money  claim with a view to potentially impacting the victim’s credit record, potentially affecting his ability to get a mortgage, a credit card and even a bank account. People believed Ms Palmer’s claims resulting in humiliation for our client, who at the time was a serving soldier and in consequence of the false claims it has ruined his career within the British army. This has caused  untold stress on the victim’s family relationships and friendships. At the time, it seemed that the harassment was not only coming from Ms Palmer, but also from her ‘friends’. Ms Palmer in order to impose further harassment and humiliation on our client to have him arrested, used these ‘friends’ to falsely report to the police on a number of occasions that our client had breached his bail conditions. By tracking her online footprints, we unmasked Ms Palmer as a lone wolf, showing her corroborating evidence to be false. 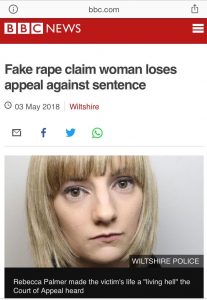 By unmasking her online actions we were able to show the Crown Prosecution Service the truth and help expose Ms Palmer’s malicious communication and perversion of the course of justice. Instead of our client facing false charges, Ms Palmer found herself facing criminal charges for which she was convicted and now serving jail time. We must remember, that while calling for the heads of Weinstein and Spacey, that we have a system of justice that requires ‘innocent until proven guilty’ for a reason. When a person makes an accusation of rape or sexual abuse, they should be supported and assisted. But false accusations, like those made by Ms Rebecca Palmer, betray real victims of sexual abuse, not just those that are falsely accused. False claims discourage real victims who fear the authorities, friends or family will disbelieve their own claim. When a person makes an accusation of rape or sexual abuse, they should be supported and assisted. The court of law is and should remain, more important than the court of public opinion. It is the court of law that should determine innocent and guilt, not public opinion. As lawyers, we are committed to serving the interests of justice, be it the child victims of sexual abuse at the hands of predatory paedophiles working in the aid industry, be it calling for better protection of real victims of sexual abuse, and by ensuring those who harass or make false reports also suffer the consequences of their crimes. We urge all victims of rape and sexual abuse to report the crime and we warn those who make false accusations that the full force of the law should apply.  By Andrew MacLeod, a visiting Professor at Kings College London and Chairman of Griffin Law, and Rico Dexiades, a solicitor at Griffin Law. Griffin Law is a dispute resolution firm comprising innovative, proactive, tenacious and commercially-minded lawyers. We pride ourselves on our close client relationships, which are uniquely enhanced by our transparent fee guarantee and a commitment to share the risks of litigation.  If you have any specific questions regarding a dispute, please email  justice@griffin.law or call 01732 52 59 23.

© Griffin Law Limited, 2022. All rights reserved. Nothing in this document constitutes any form of legal advice upon which any person can place any form of reliance of any kind whatsoever. We expressly disclaim, and you hereby irrevocably agree to waive, all or any liability of any kind whatsoever, whether in contract, tort or otherwise, to you or any other person who may read or otherwise come to learn of anything covered or referred to in this document. In the event that you wish to take any action in connection with the subject matter of this document, you should obtain legal advice before doing so.   *Griffin Law is proud to be a supporter of Hear Their Cries – Stop Child Rape in Aid
By Andrew MacLeod|2022-02-15T21:24:00+00:00November 8th, 2019|Arbitration and Alternative Dispute Resolution, Bullying and Harassment, For Individuals & Families, In the Media|Comments Off on Fake Rape Claims: Drawing the line between “Always Believe” and “Innocent Until Proven Guilty

About the Author: Andrew MacLeod

Andrew is a recognised global leader, negotiator and communicator in the business, diplomatic and humanitarian field. He has a track record of leading organisations through challenge, crisis and change. Andrew’s foundation training was as a lawyer and Army Officer (Australian Infantry). His specialisations include International Shipping, War Crimes, Crimes Against Humanity and Genocide.