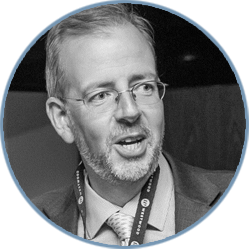 Donal Blaney is the founder of Griffin Law. The firm is named after his late maternal grandfather whom he never met.

Starting his career in the law in 1996, Donal worked in the City of London and the West End before working in the British Virgin Islands between 2004 and 2006. A pioneering lawyer who prided the firm on lateral thinking, he obtained the world’s first anti-harassment injunction that was served via Twitter in 2009.

Donal has acted as ‘consigliere’ to a number of wealthy business owners and directors, providing cost-effective strategic advice from the unique viewpoint of a litigation specialist. His particular specialisms as a litigator are in respect of complex financial disputes with an international dimension, trust and tax disputes and asset tracing. Donal prides himself, and the firm, on being proactive, innovative, tenacious and commercially-minded. He is the kind of lawyer you want on your side, not against you.

Donal is married to Marci, a US Army veteran who served in Iraq, and divides his time between Kent and Florida.

He is a season ticket holder at Anfield who has taken his admiration of Liverpool’s manager to new heights by growing a beard in the style of Jurgen Klopp.

BACK TO OUR PEOPLE
Go to Top