This is not the ‘smash and grab’ diamond heist you first thought of when you saw the headline, instead it’s a bullying tactic used by large contractors to cripple small ones within the UK construction industry. In considering the rights and wrongs of the ‘smash-and-grab’, it is important to remember the origins and purpose of adjudication, the compulsory dispute resolution mechanism that applies to the UK construction industry. It was common for large employers/main contractors to routinely withhold payment to contractors of applications made pursuant to construction contracts. The impact upon cashflow and liquidity could be devastating and a smaller contractor could find itself forced to accept a lesser sum in settlement, or face insolvency as a result of the inequality of the relative bargaining positions between subcontractors and the much larger employers/main contractors.

Parliament sought to level the playing field by introducing statutory and obligatory adjudication.

At the risk of being simplistic, a construction contract should set down a payment procedure, which should be followed when seeking payment. ‘Smash-and-grab’ adjudications can be commenced when a payment application and the relevant payment notices have not been issued in time. A successful ‘smash-and-grab’ adjudication entitles the contractor, subcontractor or consultant to paymen 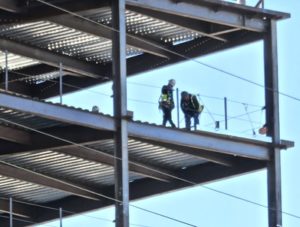 t of the full amount that they set out in their application, whether or not that sum was an accurate reflection of the value of work performed. It is very difficult to feel much sympathy for employer or main contractor whose competence is so lacking that they fail to comply with what is generally a simple payment procedure. Whilst it may be frustrating for an employer, the economic implications for a contractor can be drastic. No payment received, no subcontractors paid, no further works capable of being performed and potential insolvency for the contractor. Over the years, there have been concerns raised by main contractors/employers as to the ‘fairness’ of ‘smash and grab’. The answer to that one is simple: Issue a payment/valid pay less notice within time. In November 2018, the Court of Appeal gave judgment in S&T (UK) Limited v Grove Developments Limited, concerning a ‘smash-and-grab’ adjudication on an interim application for payment. In this case, however, the court held that the paying party could commence its own ‘true value’ adjudication to decide the true amount of the application in question, based on its merits. It also held that the paying party did not have to wait until the next payment application or assessment to commence such an adjudication, as had been found in an earlier case.

There was much speculation in the construction press as to whether this judgment meant the end of ‘smash-and-grab’ adjudications.

In February 2019, the Technology and Construction Court issued its judgment in the case of M Davenport Builders Ltd v Greer & Anor, which is believed to be the first case applying the principles from the Grove case. In this case, the contractor Davenport commenced a ‘smash-and-grab’ adjudication against Mr and Mrs Greer in relation to its final account, and won, meaning it was entitled to £106,160.84 plus interest. However, rather than pay up, the Greers commenced their own true-value adjudication six days after the above adjudicator’s decision. Then Davenport commenced enforcement proceedings in the Technology and Construction Court (“TCC”) to enforce the first adjudicator’s decision. Before the TCC hearing, the adjudicator in the second adjudication issued his decision, which was to the effect that no sum was payable by the Greers to Davenport. The Greers, logically,  wanted to set off the second adjudicator’s decision on the ‘true value’ of the final account against the first ‘smash-and-grab’ decision, which was in the contractor’s favour, saying as a result that nothing was due to Davenport. I say logically, but again remind you of the purpose of adjudication…to help with the liquidity of the contractors and subcontractors when faced with obstructive behaviour by the employer/main contractor. The key issue for the court at the enforcement hearing was whether, in light of the case law, the Greers could rely upon a claim to set off, given that they had not first complied with the ‘smash-and-grab’ decision. If they could, then it would mean they did not have to pay Davenport. It would also mean, arguably, that main contractors/employers would be given a backdoor method of delaying payment. The judge in Davenport considered and applied the judgment made in the Grove case and found that: However, he also stated that the courts will not always prevent the commencement of a true-value adjudication before there has been payment of a prior smash-and-grab adjudicator’s decision. This was because of the ambiguity on this issue in the earlier Court of Appeal judgment in 2015 in Harding v Paice. That ambiguity had not been resolved in the Grove judgment. The court declined to give any indication as to the circumstances in which it might allow such a subsequent true-value adjudication to continue. However, no indication was given by the court that the outcome of any such further adjudication would become enforceable in the absence of payment of the ‘smash-and-grab’ decision. It has been suggested that the courts may give clearer guidance in a later case. However, it is difficult to see that the courts would allow the enforcing of a later ‘true-value’ adjudication, before the ‘smash-and-grab’ adjudication was paid in full. To do so, would simply act to undermine the whole purpose of adjudication. Perhaps, such ‘true-value’ adjudications should just be considered as indicative or advisory and maybe of assistance to parties who may be willing to adopt a pragmatic position to resolving a dispute in the round. The ‘smash-and-grab’ is clearly not dead. It has important part to play in ensuring subcontractor liquidity. Long live the ‘smash-and-grab’! Griffin Law is a dispute resolution firm comprising innovative, proactive, tenacious and commercially-minded lawyers. We pride ourselves on our close client relationships, which are uniquely enhanced by our transparent fee guarantee and a commitment to share the risks of litigation.  If you have any specific questions regarding a dispute, please email  justice@griffin.law or call 01732 52 59 23.

© Griffin Law Limited, 2022. All rights reserved. Nothing in this document constitutes any form of legal advice upon which any person can place any form of reliance of any kind whatsoever. We expressly disclaim, and you hereby irrevocably agree to waive, all or any liability of any kind whatsoever, whether in contract, tort or otherwise, to you or any other person who may read or otherwise come to learn of anything covered or referred to in this document. In the event that you wish to take any action in connection with the subject matter of this document, you should obtain legal advice before doing so.
By Neil Kelley|2022-02-15T21:30:31+00:00January 24th, 2020|Arbitration and Alternative Dispute Resolution, Uncategorised|Comments Off on The construction contract ‘smash-and-grab’ is dead…long live the ‘smash-and-grab’…

About the Author: Neil Kelley